I have read many articles about people with unusual and weird skills. This one is no exception.
A Chinese man, Ru Anting, are able to write calligraphy with water he shoots from his eyes. He sucks up the water with his nose and then sprays it through his tear ducts.
Ru discovred his unusual skill while swimming in the river as a child. He told the China News Network:
“Sometimes I would swallow water while swimming, and once I accidentally discovered the water I swallowed could be shot out through my eyes. My friends were all shocked to see it.”
He demonstrated his talent at the Lotus World park where he wrote four characters, “Fu Ru Dong Hai”(“Fortune as vast as the sea”), on a board covered with red paper.
All the intensive training in developing his unusal skill made it possible for him to shoot water accurately up to 10ft ( 3m) from his eyes at will. 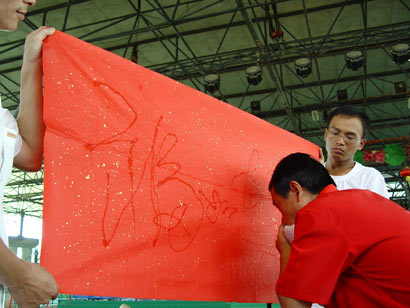