Should Soccer Vines Be Banned?

If you have never heard of Vine before then you are likely missing out; it’s the easiest way in the world to get short clips. Otherwise known as Vine videos, these are clips of around 7 seconds in length that give users an instant peak of anything they want. Some people make cool video manipulations, others make funny vines to show off and try to get thousands of plays. In the world of soccer, though, Vine videos have taken on a life of their own.
Today, when a goal is scored, if you are on Twitter or any other social media site you’d be doing well not to see one Vine video of the actual goal flying in. people love to upload funny vines that happen on the pitch, too; crazy own goals, comical interviews and even the outrageous world of Simply Spurs and Vonstreginho. Both of these Twitter accounts upload soccer-related Vine videos, and some of them have been worth thousands of watches from all over the world! 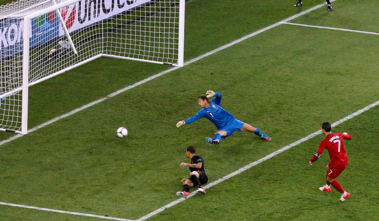 However, there have been some problems recently with Vine videos and soccer. Some of the big leagues, particularly the noxiously overpriced Barclay’s Premier League. This is a league that runs on financial fumes and does everything possible to stop that money from ever leaving their league. It’s the belief of these fatcats that Vine is taking away from “the product” as now people won’t buy a crazy Sky subscription.
First of all, though, let’s actually look at that logic. You, like billions of others, love football. You breathe the sport; every minute of the 90 is a sheer joy for you. Now, though, you can watch just the goals (from one angle) over 7 second Vine videos. Are you likely to stop watching football altogether and just become a Vine season ticket holder?
No, of course not! You’ll still, if you can, get a season book for your club that you support and probably pay a mix of Sky & BT Sports a princely monthly premium for the benefit of their services. The idea from the FA and other governing bodies that Vine is going to hurt advertising and interest in the game is preposterous – it would be easier to respect their stance if they just admitted “We’re scared that people getting supplementary viewing for free goes against the Capitalist industry we’ve churned the sport into”.
Football might be more accessible than it ever has been, especially thanks to Vine videos where now you can see ridiculous goals, saves, shots and fouls seconds after they happen. What this isn’t likely to do, though, is turn everyone into an armchair fan who has no intention of every going back in the first place!