5 of the World's Most Expensive Yachts

They say that money can’t buy happiness, and this is definitely true. Some of the world’s richest people are some of the world’s most miserable people. However, there’s a side of life that just clings to luxury, and we don’t think that’s a bad thing. There’s nothing wrong with the finer things of life, and if you can afford them — go for it! For the rest of us, here are 5 of the world’s most expensive yachts. Hey, just because we can’t afford it doesn’t mean that it’s not something that’s nice to dream about!
5. Tatoosh — $100 million

Now, it might seem strange to have a $100 million dollar yacht at the bottom of a list, but hey — when you’re talking about the world’s richest people, a $100 million dollar yacht is only a drop in the bucket.
Tatoosh is a yacht that’s over 300 feet long, and it’s owned by Paul Allen, one of the co-founders of Microsoft. The yacht has its own movie theater, big swimming pool, and even a helipad for 2 helicopters to land safely. this is definitely a luxury yacht of grand proportions. As you might imagine, only certain people are invited aboard Tatoosh.
4. Annaliesse 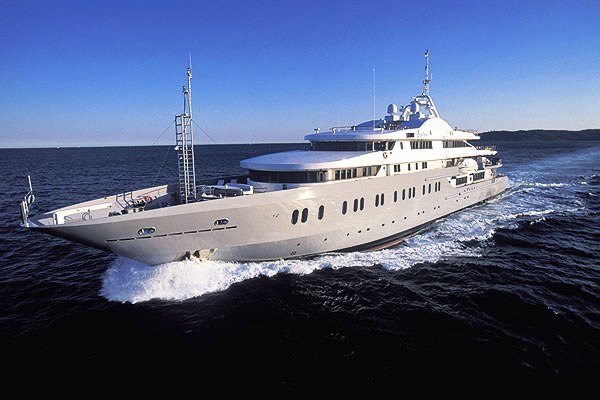 This one isn’t as long as Tatoosh is, but it’s 103 million dollars and has a few more amenities. There’s a full spa service on board, including a salon. If guests have children, they will be delighted to find that there’s a children’s play area as well. A library is on board, because everyone loves reading, right? Like Tatoosh, there’s a movie theater here as well. The main stateroom has a king-size bed and plenty of windows to let the light stream in. Heavenly, right? There are 50 people that can be loaded onto this ship — with 15 staterooms to accommodate them all.
3. Rising Sun – $200 million

This yacht is co-owned by Larry Ellison and David Geffen. It’s 453 feet long with plenty of features. There’s a gym and a spa, which includes a sauna. There’s a huge wine cellar and of course, a giant cinema with a huge screen. There are over 82 rooms on board, and this yacht measures 453 feet long.
2. Dubai – $350 million 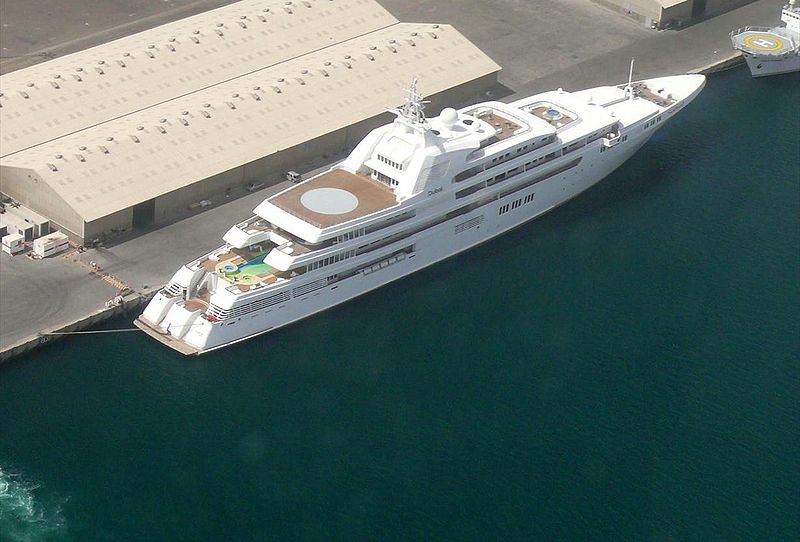 This yacht is huge — 542 ft long, to be exact. It can host 115 guests and even 88 crew members. It is owned by Sheikh Mohammed bin Rashid Al Maktoum, who is the ruler of the Emirate of Dubai and the Prime Minister of the United Arab Emirates. There’s a big pool, squash court, the infamous helipad for helicopters, and even a small aircraft hanger. Now that’s luxurious!
1. Eclipse – $1.2 billion 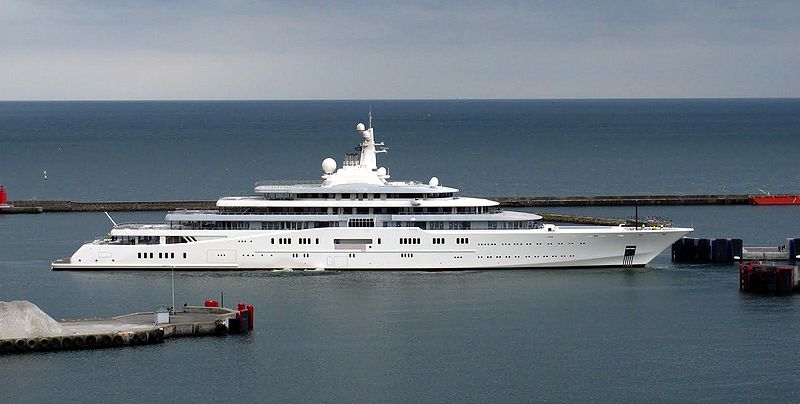 If you think you’ve seen luxury, you ain’t seen anything yet. This is the Eclipse, which combines luxury and high end technology all in one shot. It’s 528 feet long and it is truly the world’s largest private yacht. The yacht is owned by Roman Abramovich, a Russian businessman and owner of Chelsea Football Club. He is actually the 9th richest person in Russia, and the 53rd richest person in the world — $13.4 billion isn’t anything to sneeze at!
But let’s get back to his boat, shall we? The yacht is operated by over 70 crew members. It has 2 helicopter pads, 11 guest cabins, and 2 swimming pools. There are plenty of hot tubs and the yacht even carries a disco hall — who knew that Roman liked to dance?
The technology comes in play when it comes to the fact that there are 3 launch boats and a mini submarine that can submerge to 50 meters, as well as intruder detection systems and a missile defense system. There is also supposedly an anti-paparazzi shield that comes in the form of several lasers. When they detect a CCD, they shine a light into the camera to prevent the photograph from being taken. This is just rumor and speculation, as no one has any evidence to prove that it exists.
There are plenty of luxury yachts out there that could have made this list, but we wanted to give you some of the best yachts out there. Green with envy yet? We definitely were!