5 License Plates That'll Make You Do a Double Take 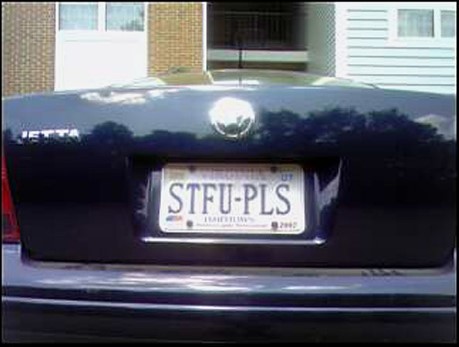 You know, it’s really funny when people take online speak (you know, LOL, WTF and OMG) and put it on license plates. This car — ha ha Jetta! — takes it one step up with the classic STFU, PLS plate.
Do we really have to spell out what STFU PLS means? We didn’t think so. Maybe the driver is telling people to STFU because they’re driving a Jetta. Those Volkswagen people can be kinda touchy.
2. Nerd’s Revenge? 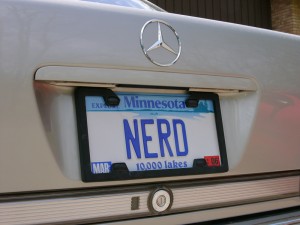 Everyone picks on the nerds in high school. It’s just a way of life. However, in this society, nerds are starting to strike back in full force. For starters, you have the King of Nerds, Bill Gates, as one of the richest men in the world. He built an entire fortune on being a nerd. We can’t tell what type of Benz is being driven here, but hey — it’s a Benz, and that means that you can’t afford it on your desk job. Just being honest.
3. Give Me A … Gas Guzzling Environmentally Unsound Monster? 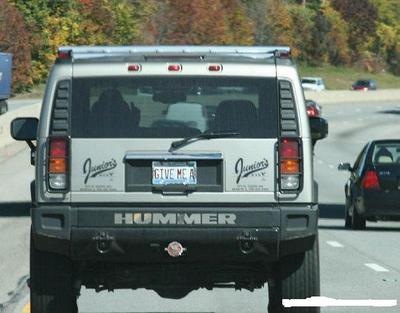 OK, we admit that we’re a little against big honking SUVs, but that’s what makes this license plate funny. “Give Me A…” and then the big HUMMER stamp on the bumper makes you realize that they’re talking about the love of their precious Hummer.
Of course, it could be anything. Give me a steak, give me a bath, give me a… well, you get the idea.
4. Sleazebag? 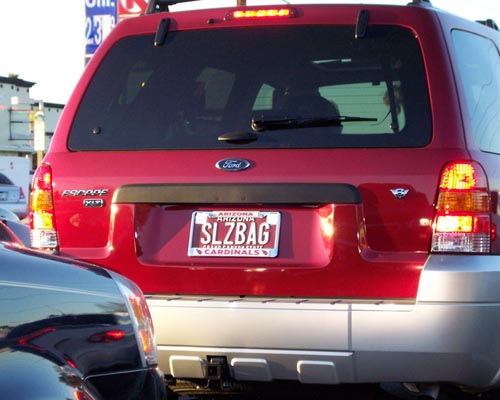 We don’t get this at all. Even though we’re not big SUV/van fans, we don’t think they’re sleazebags just for driving one. Is this a trick played on a husband by a wife that suspects he’s been seeing another woman? Or is this Charlie Sheen’s car on the sly? We’re not quite sure.
Still, it’s hilarious. I mean, when you’re down at the DMV filling out what type of plate you want, do you really spell out sleazebag on the vehicle? We think not.
5. It’s Pirate Time!

A little SUV heavy, but there’s really some funny license plates here! What could be more ironic than driving behind a Jeep that has a spare tire cover with a pirate symbol?
Having a license plate that reads AARRR. The driver definitely has a sense of humor. I wonder if they drive around town a lot on Talk Like a Pirate Day — I certainly would!
There are a lot of fun license plates out there. Some are sillier — we saw one that was nothing but 8’s and B’s — someone explain that one to us and we might laugh. There are even some that are pretty obvious – B00BS for example. Those come a dime a dozen. We picked these five because we thought they were the funniest of the group. Now, we might not have covered your favorite, and that’s okay too. If there’s one that you think we should add, just tell us — we’ll get you hooked up!