High heels and Hollywood have gone hand in hand for a long time. In fact, the craze for high heels has gotten so strong that even regular people think that they need to be in high heels all the time.
It’s a great debate in both fashion as well as feminist circles about the role that high heels really play. Many women, like Victoria Beckham, would never think to go outside without a good pair of high heeled shoes on. It’s a matter of taste for them. They feel more feminine when they actually have these shoes on, while other women might feel just plain ridiculous.
Feminists argue that high heeled shoes are just another way to keep women down.
However, when we looked at this: 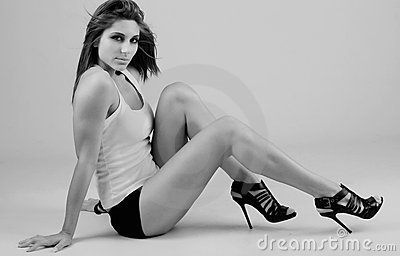 We just didn’t think that the woman in the picture looked all that oppressed to us. We’re all for women having choices and the truth is that choices cut both ways.
But let’s take the politics out of it and just be honest: high heels are hot. So in that spirit, we wanted to show you 7 crazy, sexy, and funny high heeled shoes that celebrities are trying to walk around in.
1. Coils and …Pink? 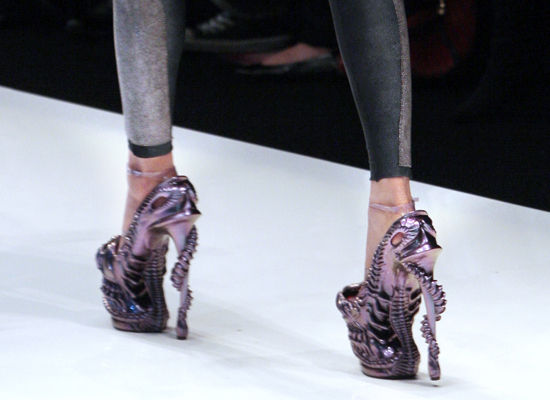 This is an Alexander McQueen creation. He’s a fashion designer that is well loved by people like Lady Gaga and Daphne Guinness.
In fact, Alexander McQueen has such a reputation for designing tall high heels that some models can’t even work for him — they keep falling off stage!
2. All White, Big Coils 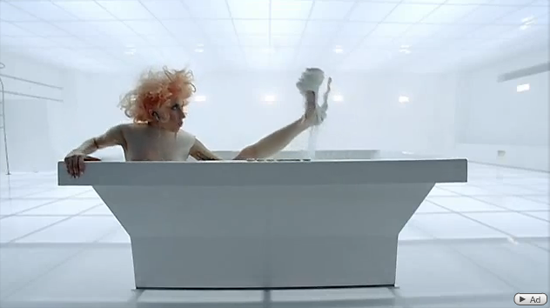 This is a shoe that Lady Gaga picked up — if you’re not sure where the shoe is from, it’s actually from her “Bad Romance” video. And if you haven’t seen it, you need to YouTube so hard that we think angels are crying. Gaga ooh la la — want your bad romance!
3. Go Sky High! 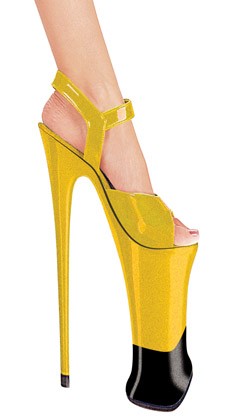 Now we’ve seen everything. If Megan Fox or Lady Gaga .want to rock this shoe, they can have at it. But we don’t think even the Sex and the City girls would touch this sky high heel anytime soon.
The celebrity look is catching fire with regular women, and they want to walk like that on the runway…and by runway we mean the sidewalk on their way to somewhere trendy like Starbucks. Or is Starbucks not hip enough anymore?
Seriously, where are all of these women gathering? The shoe is going to be less than $100, which means that it’ll be in the hands of women that usually don’t have access to the cutting edge trends. That’s just the way fashion goes.
This is being billed as one of the tallest high heels in the world, and that means that there’s already controversy. The problem with this statement is that there is already the Alexander McQueen shoes that are 10 inches tall.
Which one is going to be more comfortable to actually wear? We’re not really sure, to be honest.
This new tall heel is called the Sky Heel, and it does have a platform to use. This could give you more balance than your classic stiletto, but don’t hope for that. You’ll need to definitely do some runway walking in your bedroom before you really take this shoe to the streets.
4. No Heel, Just Height (Part One in Red)

Nina Ricci is another celebrated designer that is bringing a lot of foot and leg pain to the world with her latest creations. These have been out for a while, but what really makes them interesting is that they don’t actually have a high heel to speak of. Instead of having a stiletto, you basically have a big blocky platform that you will have to rest all of your weight on. As you might imagine, this could make it really painful to walk — you’ll definitely have to do a lot of painful moving around!
We do have to admit that we like the pleated look as well as the little “point” in the back. We think that little pointy part is supposed to help you walk better, but we would probably still fall on our faces!
5. Going All Black, But Still No Heel!
Nina Ricci continues the “no heel” look, but this time it’s in black. Ms. Ricci seems to like sparkles and laces, because she’s continued that trend too. What’s interesting about this shoe is that there is a bit of a heel in the back, but it’s not designed for you to be able to walk on it. So we are assuming that it’s more or less just for looks — how artistic can you get?
6. Purple Daze…Dazed (No) Heels, That Is!
Nina Ricci goes back to the “no heel” party again, but this time it’s all about the glitter. Glitzy heels have always attracted stars like Victoria Beckham and Lindsay Lohan, but now people can take things to extremes. It’s really interesting once you think about it — but that’s all we really plan to do. Think about it. We are not putting on a shoe that could threaten to end our existence. Just being honest.
7. A Cross Between a Banana and a Weapon?

Here’s a shoe that you could use to not only look stylish in, but also use as a weapon. You never know — people are going places they wouldn’t normally, and that means that they need to protect and defend themselves…don’t they?
The thing that gets us is that the stiletto here really looks like a giant drill bit. Are we supposed to twist in screws with our shoes now? Only time will tell before that’s the next trend.
Now, we covered 7 sexy heels that celebrities love right now — but we didn’t say that everyone would find them sexy. In fact, podiatrists (you know, those lovely doctors that tend to your feet) say that high heel use has a strong link to foot injuries. You can end up bunching your toes and causing painful bunions. However, the shoes place a great strain on your feet, ankles, knees…and even your back.
Cushions for your heels work to a point, but over time that’s not as effective as it used to be.
What do you think? Do any of these high heel shoes appeal to you? Would you wear them? Would you let your girlfriend have a pair? Sound off in the comments, we would love to hear from you!